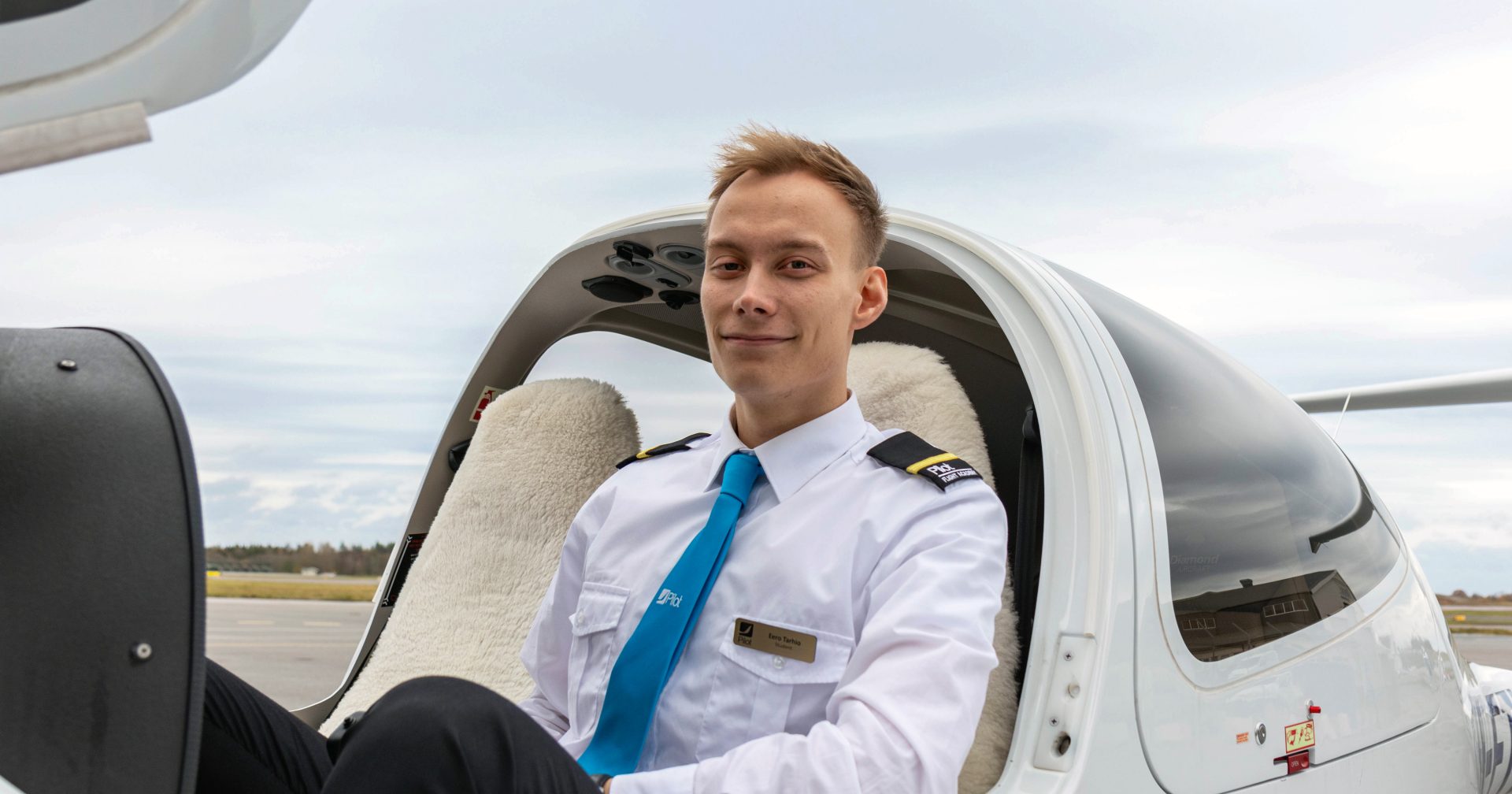 Already at a very young age Eero Tarhio dreamt of having the cockpit as his daily office. Now he is pursuing that dream as a pilot student at Pilot Flight Academy in Norway.

From the land of a thousand lakes

Eero is from the northern part of Helsinki, Finland. After serving in the army, he knew he wanted to start pilot studies, but he didn´t know where.
– Suddenly I started to get these ads saying Pilot Flight Academy is coming to Helsinki to hold a school presentation, so I decided to go there with a friend. I hadn’t even thought about moving to another country before that, but the idea was tempting, and here I am, says Eero.

The dream of flying was born when Eero had his first flight at the age of two, when going to the cockpit was still possible.
– I got to visit the cockpit and apparently, there I fell in love with flying, or at least with the buttons, Eero smiles.

From a very young age Eero’s granddad has been telling him how aeroplanes work. He also bought Eero his first Flight Simulator, which has been a huge part of his life.
– If someone is to thank for keeping my fire burning for aviation, it’s my granddad, Eero explains.

Starting on a new chapter

The excitement of learning all the time, the feeling of flying and the whole aviation business are some of the reasons why Eero wants to be a commercial pilot.
– I think that when you have grown up with this dream, you just know that it’s the thing you want to do for a living. One pilot once said to me:” When that aviation ”bee” has bitten you, there is no coming back.”

Unsure of what lies in front of him, Eero has left behind his family and friends to follow his dream. But the positive student learned that coming to Pilot Flight Academy from a Nordic country was extremely easy.

– I would say that the hardest part was to make the decision to leave Finland, he says.
– I actually thought there would be lots of papirwork, but it turned out to be very easy. In the end, challenges and problems are just things you have to deal with.

– After I made my decision, I got a lot of help and the school’s Student Service has been absolutely incredible. They helped me with pretty much everything that I had issues with, and they still do if I have something to deal with, Eero explains.
– What really became clear to me during the first days at school, and also while applying, was that everything here is done professionally. Teachers and staff are always there for you. Almost everything is new and modern here, and that’s what I like.

There is an international environment at Pilot Flight Academy where everyone is included.
– My schoolmates sometimes continue to speak English even though I’m not there with them. Occasionally, they just forget to speak Norwegian because English is the main language we are using here.

Being a student at Pilot Flight Academy can be extremely demanding at times, but hard work usually pays off in the end.
– Let’s say you might have 600 questions from Aviation exam for next week’s Progress Test and 300 pages to read from the book, with only a few days to do all that. And that’s just one week, Eero explains.

– I believe that finding your style for studying and learning how to work under pressure in a defined time is not only going to help you pass your PT’s, but it will also aid you with other things in the future, such as the type rating for an airliner, Eero says.

Norway has always been a country that has fascinated Eero, with its beautiful nature and landscapes.
– Norway is a good place to learn to fly, with slightly more extreme conditions than other places, he says with excitement in his voice.

Eero hasn’t got the chance to see Norway yet, since there is not much spare time during the theories.
– Usually, weekends are the best time to prepare for next week’s PT so that time is best used wisely. During the vacations or over long weekends, I usually go back to Finland to see friends and family again.

Eero plans to visit the cities on the west coast where his new friends from Pilot Flight Academy live. However soon he will get to see Norway from above, starting on the flight program a few weeks after his last exams.
– The best time to get to know Norway better will be when the flying period starts. There you can actually get the whole experience, Eero smiles.

– I always try to take a chance if I get one; and coming to Norway was one of those. In the end, it’s better to say to yourself that; ”at least I tried” than; ”why didn’t I do that?”

Eero is a hard-working student, and it’s obvious that he has got his feet on the ground, even though his dream is to fly.
– Long term, my wish is to be able to manage friends, family and everything else that’s going on, while being a pilot. The ultimate goal is to be able to continue to do the things I love, Eero says.

For other foreign students that might consider the pilot program at Pilot Flight Academy, Eero has some good advice;
– Don’t be afraid of taking the step. Coming to Pilot Flight Academy has so far been the most educational trip for me, and my time to actually take a leap forward in life. If you’re unsure about anything, just ask! Be social with everyone and you’ll find yourself friends to share this journey with. Don’t forget that adventures like these will be those memories that you’ll remember for the rest of your life.

Together with Nordea we provide a very beneficial 100 % student financing for citizens of Finland who start their pilot education at PFA in 2020. Read more about financing here.

Are you ready to start the next chapter in your life and become a pilot?
Find out how to apply for admission here.

Previous
A wide horizon
Next
Queen of the skies