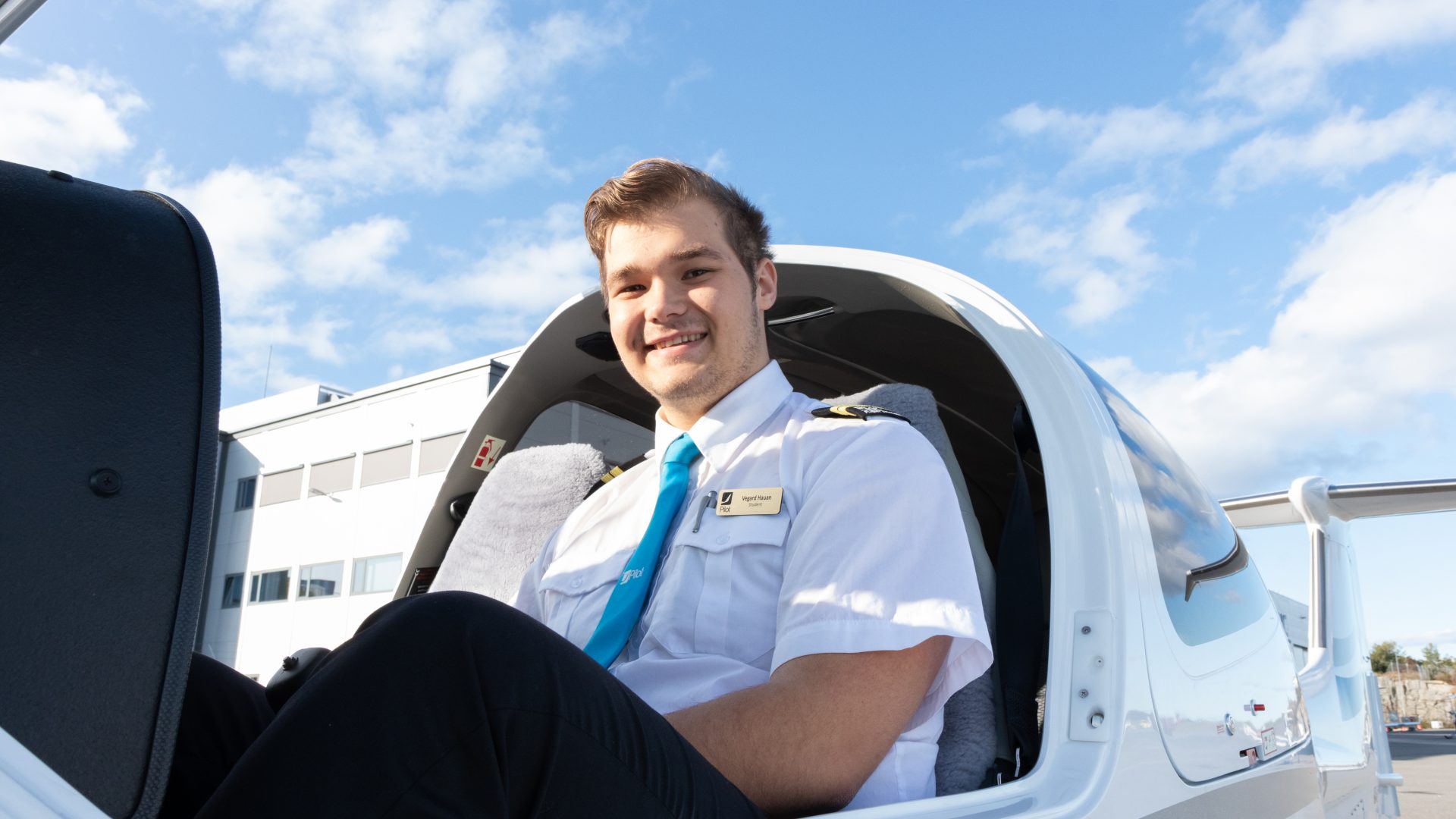 To Vegard Bjørklund Hauan it has always been about flying. In his opinion the feeling of flying cannot be described, it must be experienced.

The 20 year old flight enthusiast from Tromsø, in the North of Norway, started his pilot program at Pilot Flight Academy only two months after he finished his high school education. He was already in the possession of a PPL license, and can definitely be said to be pilot from day one!

Life as a student pilot

After one year of school Vegard has been through many exams and flight hours.

– The life as a student pilot is incredibly rewarding and exciting. It’s amazing to be around knowledgable instructors, in both theory and flying. They make the students perform as good as we are able to, say the young student.

As a pilot student you have to go through 12 subjects, where two of them are divided into two topics. The students therefor have 14 exams that they must pass. After the first 12 months Vegard has been through 11 subjects and all exams.

– It might seem tough, and it is! Everyone have a different way to learn, but with instructors that can explain how things work and why, it is much easier, the positive students says.

He is more than enthusiastic, and almost turns poetic when speaking about flying.

– Enough with the theory, at least for now. Imagine your first flight lesson, you being at the runway, ready for take off. You give the motor full throttle, hold the aircraft steady on the runway until take-off speed is reached. You then pull the stick and watch as the runway disappears under your nose. In that moment you are flying! And there is no better feeling than flying. Free as a bird, Vegard smiles.

– The more you learn and develop your skills, knowledge and awareness, the more you will understand that you are not the only one up in the air. Within commercial air traffic it’s a busy air space, with radio communication between aircraft and airport/Air Traffic Control, Vegard explains.

Student service helps with everything

Vegard found the whole experience with admission and starting school a really positive experience. He got all the help he needed from Student Service after he passed the admission test.

– Student Service is really helpful and nice people. They contact you immediately after enrollment, and helps you with everything you are wondering about.

– It is great fun to meet others that are as interested as you in flying. In addition many of us will become colleagues one day, which is nice, says Vegard, and ads one tip in particular for all when receiving the uniform;

– Since you get your uniform already the first day, you might as well learn how to tie your tie as soon as possible!

Became a pilot at age 18

For as long as he can remember, Vegard has been passionate about flying.

– I kept telling my parents i wanted to become a pilot. They probably thought it was a dream that would eventually go away, but as I got older I was holding on to that dream, and was determined I was going to achieve it. When I was 15 years old I started studying for my PPL (private pilot license). This included both flight lessons and theory, so I had to save all my money to be able to pull this off.

Vegard worked hard with his PPL while also going to secondary school, something that demanded discipline and balance. At 18 years old he got his PPL.

– That was probably the best day of my life!

The eager student took his PPL as a modular course at a flight club, which meant he had to study all on his own.

– After doing the modular course I wanted to start an integrated program where instructors taught us what we needed to know and instructed every subject. That’s why I ended up at Pilot Flight Academy, explains Vegard.

Even though Vegard had taken his PPL, he felt it was not a huge advantage compared to his classmates that did not have a PPL.

– I felt I had a small head start, but no matter your background you have to work hard at all times to keep you knowledge up to date, says Vegard. 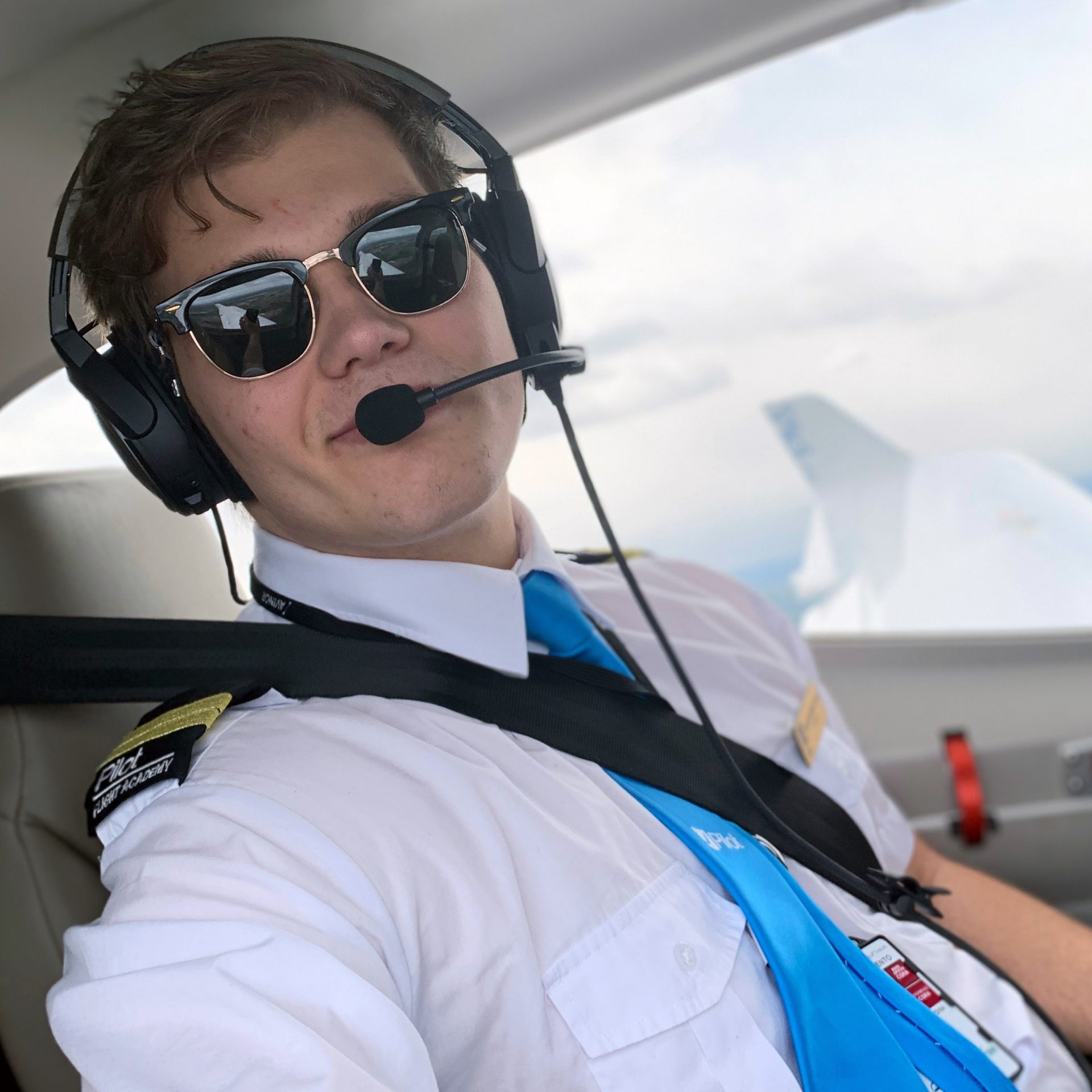 As a pilot you have more opportunities than you might think. The life of a commercial pilot can be varied, and more or less every place in the world could be your office. With the pilot license you get from Pilot Flight Academy you can apply for jobs in Europe, Asia and Africa. The pilot demand in the coming years are also huge according to studies from Boeing.

– If you want to give something back, you can take your Flight Instructor license and be a part of educating new pilots. If you want to become a pilot in an airline you can really get out of your comfort zone and apply for a job outside Scandinavia, and fly to destinations you’ve never been before, dreams Vegard.

But for now he needs to finish his exams to get closer to his dream.

– I’m going to do my exams in Radio Navigation, Human Performance and Limitations, Air Law and Flight Planning and Monitoring. The subject are all a bit demanding, Vegard grins.

– I AKG we learn about the different systems in the aircraft, how they work, how they are characterized and why they are important. The subject is all about why an aircraft is as it is, Vegard explain.

Do you want to learn more about these subjects and become a pilot?