In addition to delivering individual student commercial pilot training through out Integrated ATPL programme, Pilot Flight Academy has delivered training to a number of sponsored airline cadets over recent years. Wideroe, the Norwegian domestic airline, invested in Pilot Flight Academy as it valued the quality and standard of the training delivered, recognizing the opportunity for a potential quality commercial pilot supply. 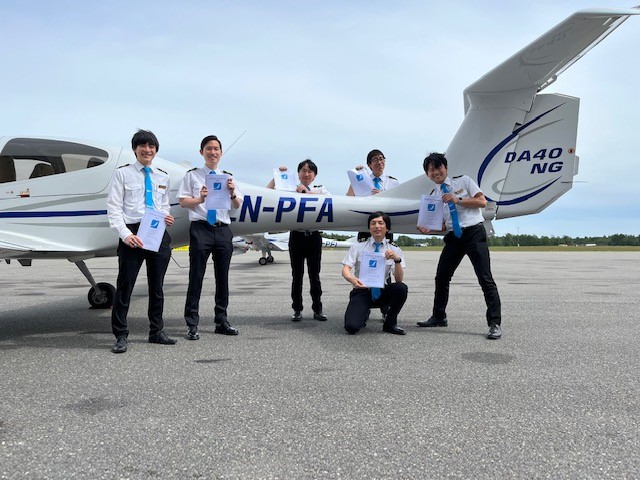 First of all, we would like to send a BIG appreciation to all the PFA employees and instructors who helped us come through these last two years of training!! There is no doubt to say that everything we experienced in Norway has made these two years to be one of the greatest accomplishments of our lives, and the biggest satisfaction was to be able to complete the entire ATPL training program with all six of us in a group.

Although there were times when things got a little difficult, the beautiful view of Gaustatoppen and the fjords made us forget those difficulties, and the views will definitely be something that we will never forget for the rest of our lives.

We also feel lucky that we got to study with our classmates from 20T9 class; to be immersed in a classroom where everything was conducted in English (or sometimes a bit of Norwegian) is something we could never experience in Japan, and interacting with our classmates made the theory classes much richer in context. (Just wish we had more time to spend in the classroom together if it wasn’t for COVID-19…). Out of school, we were invited to the constitution day party and new years party, which we really enjoyed, and sometimes we played football together. We have some great memories from those enjoyable times!

In the future, what we learned at PFA will no doubt be a big help for our pilot careers, and we all feel proud that we received the basis of our aviation careers at PFA. We all look forward to flying in the Norwegian sky again someday in the future✈️. TUSEN TAKK!!

In an audit by the UK CAA, the inspectors quoted that they “considered Pilot Flight Academy as the best ATO in Europe they had inspected”.

Pilot Flight Academy is unique when it comes to student financing which we are entitled to offer by the Norwegian, Swedish, Danish and Finnish governments. Up to 90% of the total (Integrated ATPL) programme costs are financed. Additionally, funding for accommodation and other associated costs can be granted. For airlines, seeking students from these countries, their cadet programmes are entitled to receive government funding for the students.